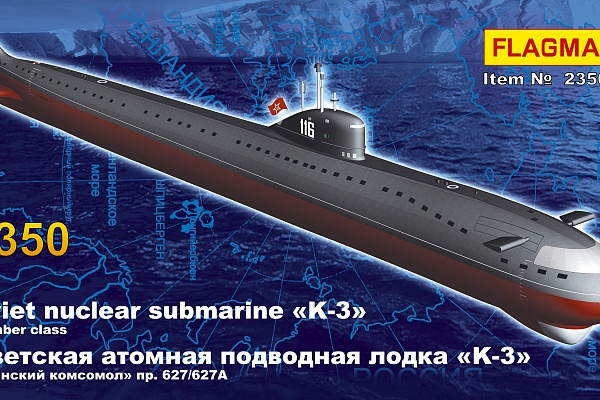 The first Soviet nuclear submarine "K-3" (project 627) (awarded the name "Leninsky Komsomol" after 09.10.1962) was commissioned in 1958. The submarine was created in response to the emergence of the American nuclear submarine "Nautilus" and appeared to be very successful. It also served as a basis for 12 improved submarines constructed per project 627A (NATO code name ? November class). Submarines "K-3" were the first output of the whole Soviet naval base that participated in fulfillment of numerous important and unique missions for the Soviet Union. Among those missions there were several individual and group cruises under the ice of the Arctic, a group cruises that ran over 20000 miles under the water of the Atlantic and the Pacific oceans. In 1968 "K-181" was the only submarine in USSR awarded with the ?Order of the Red Banner? in post-war period. Nuclear submarines (project 627/627?) occupy rightfully a worthy place in the history of the Soviet Navy.